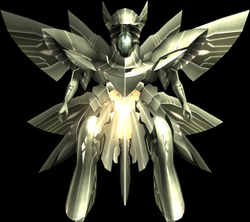 Proto Ω ("Proto Omega") is a superweapon with varying purposes. It is implied that one reason is to "challenge God."[1]

Proto Ω is one of the Relics of God. The Zohar was also used as Omega's power unit. Omega operated using Upper Domain energy that was obtained through the Zohar as power.

It was originally built on Abraxas (Michtam)—the exact date isn't specified, meaning Proto Ω could be anywhere from hundreds to thousands of years old. However, it is said that the U-TIC Organization manufactured it, meaning it's probably only a few decades old.

Upon the destruction of Michtam in 4747 T.C., it was smuggled onto Miltia.

Proto Ω was constructed and operated by the U-TIC Organization (Joachim Mizrahi) during the Miltian Conflict, commissioned by the Patriarch Sergius XVII of Ormus to ascend to the realm of God (the Upper Domain).

Sergius, like all people of the Zohar, possessed the ability to make contact with the faint waves put out by the Zohar; but as an Ormus Patriarch, his power was stronger than normal. It is believed that this is what allowed him to control Proto Ω remotely. However, his powers were not as fully awakened as those of the test subjects kept in Labyrinthos, who had made direct contact with U-DO.

Proto Ω's purpose was to destroy the Federation invasion units during the Miltian Conflict.

Proto Ω was subjected to repeated linkage-operational tests with the Original Zohar, the deployed to intercept Federation forces during the first and second Miltian descent operations.

It was deployed against Federation A.M.W.S. during the first and Second Descent Operations.

U-TIC planned to use it during the Federation's Third Descent Operation and to escort the Song of Nephilim Device from Miltia, where it would presumably dock with Proto Merkabah and become a mobile superweapon against the Federation.

Proto Ω was set to be deployed in the third descent operation as well, but once the Gnosis appeared, it was left at the hangar in the confusion.

After the Miltian Conflict, Proto Ω was left in the Abyss for 14 years.

14 years later, the key to the Abyss is unlocked. The Immigrant Fleet and Ormus invades Miltia first. It was once again operated by Patriarch Sergius XVII of Ormus upon his landing on Miltia, and fused with the U-DO system.

Furthermore, Proto Ω's true fortress is not Labyrinthos, but the Ω System: the massive facility that Miltia transformed into.

However, Wilhelm (Heinlein) had other plans. Heinlein and Margulis abandoned the Patriarch with Proto Ω in the Ω System. After Sergius XVII uses Proto Ω to kill Albedo Piazzolla, Wilhelm sends the Testaments to destroy it and the leader of the Ormus society Sergius.

After Miltia's destruction in Episode II, Proto Ω was recovered by Dmitri Yuriev and underwent final refurbishment with the assistance of Sellers based on Joachim Mizrahi's Y-Data. Yuriev's purpose was to use it to invade the realm of God (the Upper Domain).

In T.C. 4768, Dmitri Yuriev nearly brought this plan to fruition with Ω Res Novae, a rebuilt version of Ω. It was given the makeshift Zohar Emulator that Sellers created. Abel became its pilot.

One of the relics of God, constructed and operated by the U-TIC Organization during the Miltian Conflict. It was originally built on Abraxas (Michtam), but was smuggled onto Miltia upon the destruction of Michtam.

Afterwards, it was subjected to repeated linkage-operational tests with the Original Zohar, the deployed to intercept Federation forces during the first and second Miltian descent operations. It was set to be deployed in the third descent operation as well, but once the Gnosis appeared, it was left at the hangar in the confusion.

After that, it was once again operated by Sergius XVII upon his landing on Miltia. It was recovered by Dmitri Yuriev after Miltia's destruction and underwent final refurbishment based on the Y-Data.

Retrieved from "https://xenosaga.fandom.com/wiki/Proto_%CE%A9?oldid=48894"
Community content is available under CC-BY-SA unless otherwise noted.