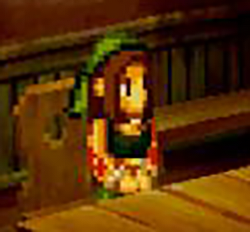 She was a young Solarian woman who was a candidate for the Jugend Military Academy. Her specialty was helping people who had become dependent on the drug Drive, a skill that nearly gained her an official position in Drive addiction and helping people who had failed Gear fusion. When Sigurd Harcourt lived in the Blanche household for a while, Racquel used her knowledge to try to heal him of his dependence to Drive.

She was also the object of affection for two Jugend recruits, Jessie Black and Isaac Stone. Jesiah won her heart, which enraged Stein to no end.

In 9983, Racquel married Jesiah and had her first child, Billy. She gave him the middle name of 'Lee', deriving it from 'Ashley', the name she had chosen when she thought her first child was to be a girl. This middle name remained her pet name for Billy, especially as he got older.[1]

As Raquel's husband began to realize the discrimination in the Solarian class system, she told him that he 'should feel the truth of the world's discrimination.' This influenced Jesiah to rebel against Solaris, leading to the family abandoning Solaris completely in 9990.[2]

Racquel and Jesiah (now going by Jessie) moved down to the surface to raise Billy. Two years after escaping Solaris, she gave birth to Primera. They settled in the Aquvy region on an island close to the Ethos HQ.

Stein, who had become a Bishop in the Ethos church under the assumed name of Stone, eventually tracked them down and sent a group of Wels, who the Ethos controlled, to the Black home and had them brutally murder Racquel. Stone's rationale for doing this was that Jessie had irrevocably 'tainted' her, and she needed to be killed for her own good.

Their mother's brutal death effected the Black children in profound ways. Billy joined the Ethos, whose lower members fought the same Wels that its higher members secretly control, and also caused him to develop a hatred of his father who was not there to protect his mother. The event also caused little Primera, who was a toddler at the time, to stop speaking completely.

Retrieved from "https://xenosaga.fandom.com/wiki/Racquel_Black?oldid=51285"
Community content is available under CC-BY-SA unless otherwise noted.