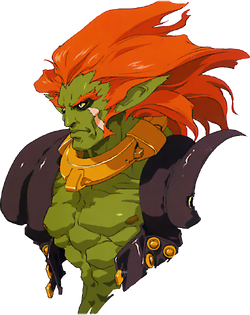 Ricardo "Rico" Banderas is the massive demi-human champion of the Battling Area in Nortune, the Imperial capital of Kislev. He has a sturdy reputation, and his size can be frightening. Despite being a prisoner of Kislev for 12 years, his lifestyle is superior to that of many nobles. He is a playable character in Xenogears.

Rico is a muscular demi-human with wild orange hair, green skin, and yellow eyes. He also has a scar on his left cheek. In his anime cutscenes, his skin is depicted as grayish green.

His outfit has him wearing a black vest with spike designs, black pants and a matching boots with purple linings. He also retains the orange prison collar on his neck and wears black wristbands on both of his wrists.

Due to a secret plot influenced by the Ethos, Rico was born as a demi-human. Rico is actually the son of Kaiser Sigmund of Kislev, which is ironic as Sigmund has an absolute discrimination towards demi-humans (which is even more ironic considering that Sigmund was originally a demi-human native of Elru).

Rico and his mother Anne were banished to hide the truth of his demi-human birth. Anne died while Rico was 10 years old, and though being sick and hated by others for having Rico as a son, she did her best to help him survive. It is implied the Ethos' doctors intentionally let Anne die from her illness.

After his mother's death, Rico became a criminal to survive and found his way into the Prison D-Block. During this time he became acquainted with a newly-found subordinate outside among the Battlers and Amazonesses, Hammer the Supplier, whom he'd typically use to clean his laundry. He was not always fair to him however, as he was often the subject of his verbal and physical abuse. His power and skill made him Battler material, and he became the reigning champion of Kislev in 9991 for many years, until he was defeated by Fei Fong Wong and Weltall. Since he was 14 years old, Rico formed a criminal gang of boys and began to plot against Kaiser Sigmund.

His one desire, despite his apparent disinterest, is to avenge his mother and himself.

Rico has shown to have a rather fickle nature. At first he shows little interest in joining Fei's party. Upon losing the title of battling champ, he resumes his assassination attempts on the Kaiser, until his subsequent recapture. After this, he is dealt with harshly, in the form of being pitted against a Rankar without his Gear. Fei comes to his rescue and attempts to convince him that there must be things for him to live for. Rico gives no reception for Fei's compassion for a second time (the first time being when he got injured fighting a monster in the Kislev sewers to help clear his name).

Upon the sight of his hometown coming under attack from Gebler forces, he's apparently uncaring and cynical about Fei's rushing into action. When he sees the people of the Kislev slums evacuating to safety the first words that come to his mind are "Who gives a damn about this crap town!?" Then Fei's words reach him and cynically resides to the notion, "...I'm crap too." He then somehow retrieves his Gear among the confusion of the sky battle, and rushes to assist Fei.

After successfully averting Kislev's destruction, he's nowhere to be found until a short time later when he rescues Fei and his friends from secured checkpoint of apparently armed and formidable-looking guards. At this point, he claims his only interest is finding a way out of Kislev, and intends to move on after that. He accompanies the party to the Goliath Factory and assists them in successfully fighting off Grahf from halting their progress, with a little help from Hammer (whom he'd pay repercussion to for being cocky with his success in shooting down his Gear). This victory would be short-lived however as the war ship they stole would soon be shot down by Bart via the Yggdrasil. After being rescued, and not knowing who the culprits was to his predicament, he wished to meet Bart as he was intrigued by his status a revolutionary, until he finds out that he was the one responsible, giving a bruise in return. When Bart apologizes to him, he shrugs it off, saying that he's more impressed with the quality of his Gear and the the others in the dock. Upon the realization that he can't learn about the world from inside a dark prison, he elects to join Bart's crew, and Fei's party to this extent.

Upon reaching Solaris with the party, and hearing the position Hammer would choose to have as an informant, Rico chastises him for being pretty much useless in that he'd only be good at watching people die. Upon his capture and subsequent escape from Solaris, he is shocked and infuriated with Hammer's betrayal, cursing him just as he tries but fails to capture Elehayym Van Houten for Karellen.

He wouldn't see Hammer again until, after his Gear's anima fusion, upon which Hammer appeared before them in a unique brand of a Wel Gear, and claimed to have super strength like Fei, so confident that not even Rico would be able to defeat him either. He then engages combat with the party. While his Wel Gear proved to be a formidable individual opponent, he was ultimately no match for the party collectively. Upon his defeat, Hammer reminded Rico to return to Kislev as he's next in line to be Kaiser, much to Rico's surprise of him having known that. Rico shows nothing but remorse for Hammer, and would not forgive what Karellen did to him.

He would stay with the party up until after the destruction of Deus, as well as after Fei's return from rescuing Elly.

If the player passes the "Baptismal Ceremony" when first meeting him, Rico will challenge Fei. This fight cannot be won normally, as Rico's stats are extremely high (except his Ether defense). While it's possible to inflict damage to him via either cheating, excessive grinding or using Fei's Chi attacks, should his HP be depleted the player is still considered to have lost the fight.

His AI script casts Steel Body one turn, Steel Fist the next, and then unleashes an 11 AP (invalid without cheating or storing deathblow points) combination of four triangle attacks, two square attacks and one x attack, which will inflict maximum damage to Fei.

Rico is one of the strongest characters, but also one of the slowest. His attacks deal a lot of damage compared to any other character, which alone makes up for his speed.

Rico prefers to use bare fists and his fighting style is wrestling. He demonstrates most of his wrestling techniques with moves such as backbreakers, piledrivers, suplexes, and lariats when using his deathblows. When using his elemental deathblows, Rico can perform a triple suplex on his opponent and a lariat embedded with fire. His final piledriver move causes especially heavy damage to his opponent. It is important to note that Rico is the only party member who suffers a severe loss of utility against giant enemies without his Gear, as his deathblows are all grappling techniques, and as such he cannot grab opponents who greatly outclass him in size. The only move that Rico can use on giant enemies is Flame Lariat as it does not involve grappling.

In Gear battles, both Stier and his Omnigear, El-Stier, fight using their bare fists, headbutts and some wrestling techniques when using their deathblows, in addition to gunshots from a vulcan chamber.

Retrieved from "https://xenosaga.fandom.com/wiki/Ricardo_Banderas?oldid=51504"
Community content is available under CC-BY-SA unless otherwise noted.