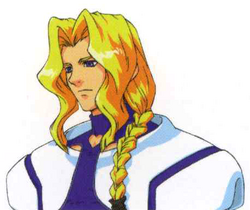 Roni Fatima is Rene Fatima's brother and the ancestor of the Fatima dynasty, whose members include Bartholomew Fatima, Sigurd Harcourt and Marguerite "Margie" Fatima.

As part of the Anti-Solaris Alliance, Roni was an ally of Sophia, Lacan, Zephyr and Karellen's and he fought in the Shevat-Solaris War 500 years ago. He also helped defend Ignas against the invasion of the Diabolos Corps in an event known as the "Diabolos Collapse" after Lacan was driven insane by the loss of Sophia and became Grahf, the Seeker of Power. Roni was saddened by Rene's death in the war.

Roni was the original pilot of the Omnigear Andvari and creator of the Yggdrasil I-IV. Andvari was locked away with the promise that if Aveh, the nation he went on to found, was ever in danger his descendants could recover it from Ft. Jasper and use it to save Aveh.

Roni went on to found the desert kingdom of Aveh in 9510 and become its first king. According to Zephyr (if Bart is in the party upon the player's first encounter with her), he was much more calm and quiet compared to his descendant, Bart.

It is unknown what happened to Roni after, but he was able to reach his 40s.

Retrieved from "https://xenosaga.fandom.com/wiki/Roni_Fatima?oldid=50095"
Community content is available under CC-BY-SA unless otherwise noted.