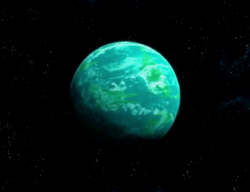 Shion Uzuki and Jin Uzuki were part of this surviving group; Jin lived here before his eventual death. However, the database for Episode I says "Shion's parents' home is located here" (Shion's parents died during the Militan Conflict), implying that Second Miltia was colonized to a degree before the Miltian Conflict.

It was only recently terraformed, so it still has an abundance of forests. The atmosphere-generating nanomachines within the ocean are still active, causing the planet to appear light green from space. It is blessed with a great deal of water, making it reminiscent of Lost Jerusalem.

Second Miltia has its own government that is separate from that of the Galaxy Federation, with Helmer at the helm. The U.M.N. Control Center, Vector Industries's Second R&D Division, and many spaceports dot the skyline of the planet's capital.

After the framing of the Kukai Foundation, Second Miltia and Gedalya are not on good terms.

In the finale of Episode I, Albedo Piazzolla plans to crash Proto Merkabah into Second Miltia, killing thousands (perhaps hundreds of thousands, or millions) of lives. The attempt is prevented by Shion Uzuki and her group.

Second Miltia is visited at the beginning of Episode II.

Part of Second Miltia, Pedea Island, is one of the visitable locations.

Shion Uzuki and KOS-MOS at the Second Miltia Space Port.

Institute for Genetic Studies & The Nice Doctor of Your Neighborhood.

Uzuki residence.
Add a photo to this gallery

Erde Kaiser Sigma on Pedea Island.
Add a photo to this gallery

Second Miltian Gunship.
Add a photo to this gallery
Retrieved from "https://xenosaga.fandom.com/wiki/Second_Miltia?oldid=49733"
Community content is available under CC-BY-SA unless otherwise noted.