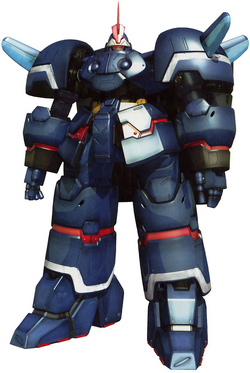 Seibzehn is a titanic blue Gear controlled by Maria Balthasar, "Siebzehn" is German for "Seventeen", perhaps inferring that Seibzehn was the seventeenth version of its design. Seibzehn is unlike most other Gears in Xenogears in a variety of ways, one of which being that Maria does not pilot it by sitting in a cockpit inside it—she rides on its head and controls it with verbal commands, similar to Giant Robo.

It was created in Solaris by master Gear designer Nikolai Balthasar at the horrific cost of hundreds of land dwellers' lives, including Claudia Balthasar. Because part of the Gear's neural make up is comprised of Wels, the Gear itself has a personality and a degree of autonomy. Nikolai programmed it to escape Solaris and flee to Shevat carrying young Maria with it. Ever since Maria has used it to defend Shevat from any and all threats to its safety.

When Shevat is attacked by a brainwashed Nikolai who had also been merged into his next generation Gear Achtzehn (eighteen in German), Maria reluctantly rode Seibzehn out to confront her father. Nikolai was able to regain control of himself but couldn't live being trapped in the shell a Gear so he activated one of Seibzehn's dormant weapons, the Gravitation Cannon. To her horror, Seibzehn acted beyond her control and fired the cannon on Achtzehn and completely obliterated it and Nikolai.

In battle, aside from Xenogears, Seibzehn is the strongest Gear in the game. Its physical attacks are arguably the best of all the "normal" Gears in the game, but its power is offset by low speed and sometimes poor accuracy, much in the same vein as Rico's Stier. Seibzehn can also appear while Maria is on foot through her "Call" special ability, and its concept and physical design are based on Giant Robo of super robot fame. Maria can also summon Seibzehn via Controls ability.

In contrast to Maria when she attacks them in a weak manner and summoning Seibzehn to attack via controls, Seibzehn has more movements than the pilot Maria herself. It can shoot both of its fists similar to a rocket and more focus on beating opponents in a close range and also shoots finger missiles on the Gear's fingers. In the boss battle against Fei and the group at the top of Babel Tower, Seibzehn's moves are retained as one of the Gear Deathblows are used to deal heavy damage. In one of its Infinite Deathblows Maria Beat, Maria wields a red heavy mallet to directly hit the opponent's head to deal massive damage.

Xenogears - Seibzehn Deathblow Exhibition
Add a photo to this gallery
Retrieved from "https://xenosaga.fandom.com/wiki/Seibzehn?oldid=51707"
Community content is available under CC-BY-SA unless otherwise noted.