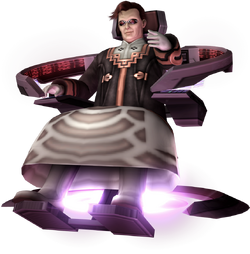 Dr. Sellers is an Ormus and/or Hyams figure who appears to be a paraplegic man confined to a futuristic hoverchair - a result of Dr. Joachim Mizrahi, who shot him once in each leg.

Sellers is the third person in the Heinlein-Margulis-Sellers triad, for he has close connections to both men, especially in situations regarding the Zohar and Old Miltia. His roles have included advisor and middleman. However, he has close connections to the Ormus assassin Orgulla. Sellers destroyed Pleroma so that the Galaxy Federation would not continue to investigate the old U-TIC base. This shows that he does have significant power in Ormus. Although not a businessman in the Hyams front of the Ormus Society, Sellers is a scientist interested in the Zohar.

Sellers was a fellow colleague of Joachim Mizrahi, and had been his rival from then on.

Sellers was originally from the Federation, not Abraxas or the Immigrant Fleet, but defected to the U-TIC Organization and Ormus by a personal communication. He served as an Assistant Director, but doesn't possess any rank in Ormus.

Sellers and Joachim were involved in the U-TIC Organization's Zohar research.

During the Miltian Conflict, Sellers appears before Proto Omega and its system being maintained by Cecily and Cathe (the two sisters of Febronia that keep the Zohar under control). Margulis arrives and muses about the plot to make Joachim as the "mastermind" for the Miltian Conflict. Sellers replied that it was Kevin Winnicot's idea to make Mizrahi into a scapegoat and comments that the boy is quite the tactician for his age. When told about the attack on the transport vehicles that were containing the Realians for the project, Sellers merely said that they only lost a few Realian models and that it won't affect the project. However, he expresses his concerns on what the Federation is planning to do next. Margulis then said that the Zohar activation must happen at the same time as the outbreak, thus allowing Proto Omega to be awakened. Margulis then asked Sellers if he had deciphered the Y-Data, and Sellers answered that he only found some file fragments, but Joachim won't tell him a single thing about it. Sellers then openly continued to say that he had got Winnicot to get some information from him, but doesn't know how it'll go. Margulis said that as long as the Zohar activation succeeds, then they can deal with the rest later. Sellers asked him on what's their plan, which Margulis answers that he'll pick him up and the others, along with the Zohar before Miltia enters in complete chaos. Sellers then walks away and replied that he won't hold his breath, should things go as planned. Sellers then stopped for a moment and said that, should it come down to it, then he'll lift the whole Song of Nephilim into space. He then left the Proto Omega room and left to continue with the plan.

Sellers went to confront Joachim about his work on the Zohar experimentation, and about MOMO's creation. Sellers told him that he doesn't care about that "doll of a daughter" that Joachim is obsessed about, but he can't have Mizrahi forgetting about their real objective. For the operation has already begun. Joachim merely reminded Sellers that he and Winnicot formulated it, and doesn't see why they need him anymore. Sellers then told him that he'll be running the management of this project, if Joachim has lost his nerves. Mizrahi replied that he may do as he wishes, as it is no longer his concern. The two colleagues go their separate works, where Sellers continues on the Zohar activation, and Joachim continues his work for MOMO's creation.

During the Miltian Conflict's Third Descent operation, Sellers confronted Joachim and Joachim shot him in both legs, crippling him.

Some time after Joachim's death, and the Gnosis appeared because of Shion Uzuki's power with U-DO, Sellers attempted to escape the planet by forcing the Song of Nephilim to surface. It was at this time that he found Albedo Piazzolla in the center shaft of the Song, and apparently half-dead from his fight against Nigredo, the failsafe and executioner of the U.R.T.V.s.

After successfully escaping Miltia before it was swallowed by the Abyss, Sellers handed over the Song of Nephilim to Albedo, and it served as the psychopathic U.R.T.V.'s home and headquarters.

After Joachim's death, Sellers plagiarized his life's work and directed a series of experiments using a Zohar Emulator at the Ormus Department of Sacraments. He is secretly a member of U-TIC, Ormus and the Immigrant Fleet.

Sellers appears in a video chat with Margulis. They discuss Lost Jerusalem and the Zohar Emulators, Plan 401, and the Y-Data.

Sellers only appears in one cutscene. He mentions he destroyed Pleroma to Margulis.[1]

He is also mentioned by Orgulla, who says, "Damn you, Sellers!"

He presently works for the Federation on the development of Omega Res Novae under Dmitri Yuriev. Sellers used his connections with Dmitri to join the Salvator Faction and the Federation -- his decision was motivated exclusively by self-interest in achieving his goals, and not through any personal loyalty to the Federation.

Sellers appears in the Merkabah.

Seller's fate is left ambiguous, as as he never appears again after the scene in which the Merkabah is absorbed by Abel's Ark, shortly after the party abandons it.

Sellers with Cecily and Cathe.
Community content is available under CC-BY-SA unless otherwise noted.