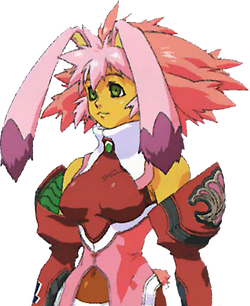 Seraphita is the Fire Element. She is an archetypical ditz, often making dim-witted, scatterbrained, remarks. Though still a competent fighter, Gear pilot, and user of fire-elemental either. She is often partnered up with Tolone, the smartest member of the Elements and her exact polar opposite.

Seraphita appears to be a demi-human and has rabbit-like ears flopping off the top of her head and a fluffy rabbit tail at the base of her spine. She has all the energy (and sense) of a bouncing bunny, so it suits her a great deal. While this beastiod appearance may make her seem harmless and all the dainty, this doesn't make her any less deadly.

Sera, as she's referred to by her fellow Elements, is normally sent out when extra muscle and Ether power is needed, otherwise Dominia Yizkor and Kelvena normally handle all the assignments.

She was saved from being processed in the Soylent System by Kahran Ramsus and made into an Element, an elite Solarian Super Soldier. Seraphita pilots the Grandgrowl, a Gear that looks like a winged lion. Together with the other three Element Gears it combines to form the massive G-Elements. She possesses the unique ability to syphon Ether points from her opponents which can be a nuisance for those especially dependent on healing magic if she's not dealt with quickly.

Gameplay wise, Seraphita is fought twice when she was aided by Tolone in Disc 1 and later in Disc 2 where she was aided again by Tolone along with Dominia and Kelvena. She uses bare fists to fight her opponents but also have childish taunts when attacking her opponents.

In Gear Battles, her Gear is Grandgrowl and her attacks are different than her role as a boss character. It can shoot fireballs within the lion's mouth in one growl and the other is to ensnare her opponent with her fire ball and tackles them for an extensive damage.

Seraphita is symbolic of seraph.

The four Elements.
Add a photo to this gallery
Retrieved from "https://xenosaga.fandom.com/wiki/Seraphita?oldid=51047"
Community content is available under CC-BY-SA unless otherwise noted.