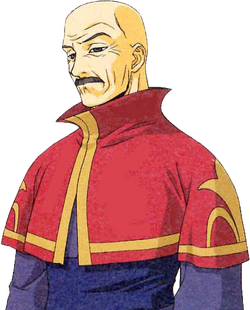 Shakhan was a greedy politician in league with Solaris who was obsessed with power. He became a cardinal in the increasingly divided Ethos organization, and the figurehead leader of Aveh.

Wanting to know the true nature of the Fatima Jasper, Shakhan had any member of the Fatima royal family tortured, killing many in the process, while others, such as the former Nisan Mother Elvira and King Edbart, killed themselves to avoid any chance of him gaining their knowledge. The former prince Bart and his cousin Margie were locked away until they were rescued one month later by Sigurd and Bart's retainer Maison.[1]

Shakhan formed a military alliance with Gebler forces in order to maintain his rule as the new self-proclaimed Prime Minister of Aveh, as well as to bolster his forces in the newly reheated war with Kislev. He aimed to expand Aveh's territory into Kislev's own, expanding his empire.[2]

After Aveh falls to Bart, Shakhan attempts to claim vengeance by defending the Ignas Gate near Nisan, which was one of the gates the group needed to destroy in order to stop the barrier that keeps Solaris inaccessible from the rest of the world.

During the battle, Shakhan is offered "The Power" from Grahf, which he accepts. Despite the boost to his Gear, he is still no match for Bart's newly recovered Omnigear Andvari and his allies. Shakhan's Gear ultimately overloads from the power it was draining from the Gate, and Shakhan dies in the resulting explosion as the party flees.

Retrieved from "https://xenosaga.fandom.com/wiki/Shakhan?oldid=51595"
Community content is available under CC-BY-SA unless otherwise noted.