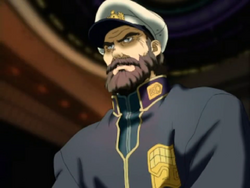 Shigeyoshi Inoue is the captain of the Eldridge.

His trio of female systems operators struggled valiantly to prevent Deus from taking control of the ship right out from under them but their efforts were in vain. Before Deus assumed complete control over the vessel the captain initiated the ship's self-destruct system and the Eldridge exploded over an uncharted life-sustaining planet free of intelligent life (though it did and still does contain the semi-intelligent creatures known as Chu-Chus). Deus and a single child named Abel managed to survive the ship's destruction, but its crew and colonists perished.

The captain has a family. Knowing he's probably going to die, he opens a pocketwatch and spends his last few moments smiling at a picture of a middle-aged woman and a young girl, who bears a striking resemblance to Elehayym Van Houten. Accepting defeat, he blows up the ship, killing his 1,200,000 passengers along with himself in his last act of free will.

:o
Add a photo to this gallery
Retrieved from "https://xenosaga.fandom.com/wiki/Shigeyoshi_Inoue?oldid=49421"
Community content is available under CC-BY-SA unless otherwise noted.