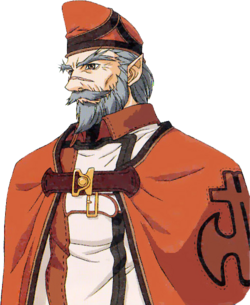 Sigmund, full name possibly Sigmund Banderas, is the Kaiser of Kislev. He is a bearded old man with a large nose and distinct pointy ears who usually wears red and black robes.

Sigmund was originally a native of Elru, who was outside the country when it was destroyed.

He became involved in Kislev's military, rising in power until he eventually became Kislev's dictatorial Kaiser. The fact that he was originally actually an Elru demi-human is ironic enough, considering his hatred of demi-humans. Though, like Dominia Yizkor, his demi-human appearance was subtle, allowing him to pass himself off as human in most circles.

Before Sigmund came to power, the Ethos society held a lot of influence in Kislev, so when Sigmund kicked everyone involved with the Ethos out of the government and severed all ties with the false church, it created a good deal of animosity between the Kaiser and the clergy. The Ethos responded to Sigmund's house cleaning by having their doctors genetically altering his unborn child so that his demi-human features would be much more pronounced than his own.

When his son Ricardo was born to his wife, Anne, Sigmund was out on the frontlines away from Anne. The Ethos banished Anne and Rico, and the Ethos lied to Sigmund, telling him that his Anne and his son died. Sigmund had no idea that his son was a demi-human, and 10 years after Rico's birth, Anne died.

Sigmund began enacting all sorts of anti-demi-human laws and legislations that made life extremely hard on the demi-human population of Kislev, including Rico.

When Rico was a grown demi-human, he was so infuriated by the Kaiser's policies that he tried to assassinate or otherwise harm him physically several times, not knowing that the Kaiser was his father nor was Sigmund aware that his attempted killer was his own son.

Despite his dubious nature, the Kaiser openly associates with Grahf, the Seeker of Power and his representative the Executioner. Grahf often brings the Kaiser items and technology from Solaris like Weltall and a Gate Keeper device.

Even when Sigmund, a widower, realizes that Rico is actually his son, he still orders his execution after Rico again tries to kill the Kaiser by crashing his Gear into the Kaiser's box seat at the C-Block Battle Arena.

Some of Hammer's dialogue in Disc 2 makes it sound like the Kaiser died sometime over the course of Disc 2, but this has never expressly been confirmed. Hammer says to Rico, "Promise me you'll go back to Nortune one day... You are... the next in line... to be the Kaiser..."

The title "Kaiser" is the German word for "Emperor".

The name Sigmund has its roots Old High German language and can roughly be translated with "victorious defender of the weak".

Retrieved from "https://xenosaga.fandom.com/wiki/Sigmund?oldid=51838"
Community content is available under CC-BY-SA unless otherwise noted.