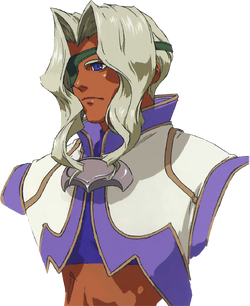 Sigurd Harcourt is a character in Xenogears.

Sigurd was born in the remote Aveh province of Norn, to Shalimar Harcourt and the King of Aveh Edbart Fatima IV. He is the product of an affair between the two, and while his mother made sure he knew exactly who his family was, he was kept in Norn to protect both Sigurd and his father. It seems he had a huge family on his mother's side. Thus, he is secretly Bart Fatima's half-brother (same father, different mothers). His dark skin is from his mother's side, while his silver hair and blue eyes are from his father's.

He is taken on as his uncle Mimil's adopted son.

At age nine, his cousin Jordegarde is born and she was raised in the family as his adopted sister.

When he was ten, he was assigned to his father King Edbart as a squire, but didn't go to Aveh yet.

When he was eleven, his mother sent him to Bledavik to work in the palace, and made him promise not to reveal his identity to the king. She died after he left, implied from a sickness, but he kept his vow. At the funeral, Sigurd saw his biological father Edbart IV for the first time. Edbart knew the truth, but never said anything to respect Shalimar's last wishes. Afterwards, Sigurd entered the Aveh palace as the Heir's (baby prince Bartholomew "Bart" Fatima) appointed Guardian and knight-in-training.

When he was thirteen, Sigurd was kidnapped and taken up to Solaris as a sample, presumably a representative of Norn. He was in the labs two years and was essentially tortured. He and Midori Uzuki are the only known characters in Xenogears with extra-sensory abilities.

Fortunately, when he was fifteen, due to sponsorship by Kahran Ramsus, they handed him over to Jugend Military Academy, although Sigurd was freshly brainwashed and ready to be trained. To be cured of his drug (Drive) dependence, he stayed at Jesiah "Jessie" Blanche's home for a while, where Racquel healed him. This is also when Sigurd became close to a very young Billy Lee Blanche.

At Jugend, Sigurd was a cadet along with Kahran Ramsus, Myyah Hawwa, Hyuga Ricdeau (later known as Citan Uzuki) (his roommate and best friend), Jesiah "Jessie" Blanche, and Isaac Stein (later known as Bishop Stone). He was also an honor student, and when he graduated he joined Jesiah's new group and became the Fire Element.

A year later, Solaris's brainwashing finally wore off, and Sigurd planned to return home. Ramsus wasn't keeping the promises Sigurd thought he had made, and it's possible he also heard about Shakhan's coup in Aveh - which would have been the final straw. Despite being an outsider with his own family in Bledavik, he was very loyal to them.

Returning to the surface Edit

He left Ramsus and the others behind, escaped Solaris in 9987 at the age of 17, and arrived in Aveh in time to help Maison rescue Bart and Margie from Shakhan. Upon learning of Bart's torture, Sigurd was so enraged that he almost wanted to kill Shakhan, but Maison convinced otherwise and they escaped.

From that point forward, Sigurd dedicated his life to protecting Bart and Margie, teaching the young prince what he would need to know to rule. His intention was to restore Bart to the throne someday. He keeps his past and his identity a secret from Bart, but his loyalty is unquestionable.

Sig and Bart both lost one eye in an accident on the Yggdrasil two years before the Xenogears. Sigurd lost his right eye, and at Bart's urging, he wears a similar eyepatch. He also acts as the right-hand man to Bart aboard the Yggdrasil IV.

Retrieved from "https://xenosaga.fandom.com/wiki/Sigurd_Harcourt?oldid=49351"
Community content is available under CC-BY-SA unless otherwise noted.