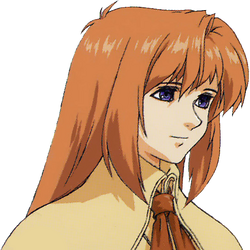 Mother Sophia, also known as Elly and Elehayym, is a woman who lived 500 years before the events of Xenogears. She is the first Mother of the Nisan Orthodoxy and is the third chronological reincarnation of Elehayym Van Houten that the game portrays.

Sophia is but a given title name to her status (much like how the Papacy functions), as her proper birth name was also "Elehayym".

Sophia was born as the second daughter of three sisters of the Bishop of the Nisan teaching's "Ashura Monastery" in the year 9475.

When she was 7 years old, she manifested a rare talent (Ether Ability) and was sent as the adopted daughter to Cardinal Penuel as a future candidate for the Holy Mother of Nisan.

However, suffering from congenital illness, she was transferred back home to the Ashura Monastery at the east side of Ignas about a year later as it had a clinic. There, she met Lacan, although they were moreso acquaintances than friends. A few months later, after recuperating, she returned to Penuel convent. At their parting, Lacan gave Sophia a sketch of herself.

At 13, she was chosen, effectively changing her name to "Sophia". However, this was in the midst of battle between factions over the selection of Holy Mother. Fighting among the Church factions was a bloody battle for the choosing of Mother based on heredity within the Church. The Penuel faction also was not immune to this and gradually Sophia would begin to feel responsible for it, bringing upon the desire to take her own life to end the suffering. When the attack on the monastery occurred by Nimrod, Sophia was faced by Karellen, leader of Nimrod's Corps, who was there to kill her by the Nimrod Emperor, Kusel Laodicia. She simply smiled and said "...thank you.", as if he were about to release her burden. Having been taken by her smile, Karellen instead chose to take her away and protect her.

For 7 years, Karellen and Sophia were in exile and their whereabouts were unknown.

In 9495, upon returning to Nisan with Karellen, Sophia had learned that public interest in Nisan teachings were waning. Sophia, as a candidate for the Holy Mother of Nisan, appeared before the Nisan members. Because of the former Penuel's sponsorship, Sophia becomes the Mother. As a result, she restructured the organization and renamed it the "Nisan Orthodox". In the process, she changes many of the teachings as well. Jaquelinde becomes the Mother's assistant adviser.

In 9496, Sophia became reacquainted with Lacan at Ashura Monastery.

Upon the outbreak of the Shevat-Solaris War in 9496, refugees poured into Nisan. As part of the Anti-Solaris Alliance, with Sophia at the head of the Healing Corps, she became revered as "Holy Mother". After that, when Nisan entered battle, Sophia's will stood as a symbol for the surface-dweller's army, and a symbol of unity and hope among the Lambs.

In 9499, at the urging of Karellen, Lacan began painting Sophia's portrait. Lacan avoided painting the bottom right corner as much as he could just so that he could spend more time with Sophia, so the painting was never actually finished. Lacan even lied about not having enough paint.

There was a complicated relationship (perhaps a love triangle) between Sophia, Lacan, and Karellen. Sophia and Lacan had unrevealed romantic feelings for each other. Karellen had unrequited feelings for Sophia as well.

Due to a secret plot between Shevat and Solaris, the surface-dwelling army was set a trap. In exchange for ending the war and taking Myyah Hawwa prisoner, Solaris wanted Sophia. The Mother Sophia, on the Excalibur; the flagship of the Anti-Solarian Alliance, let out a huge cry, "Lacan! Live!" before crashing the airship into the Merkava to save her people.

The grief and emotional pain caused by Sophia's death led a devastated Karellen to question the existence of "god" and "commit so many sins" in hopes of creating a "god". It also spurred a regretful Lacan to obsessively seek power, facilitating his transformation to Grahf.

In Gnostic lore, Sophia (Greek Σoφíα, "wisdom"), is the Demiurge's mother and a partial aspect of the divine Pleroma. She desired to create something apart from the divine totality and without the receipt of divine assent. In this abortive act of separate creation, she gave birth to the monstrous Demiurge and, being ashamed of her deed, she wrapped him in a cloud and created a throne for him within it. The Demiurge, isolated, did not behold his mother, nor anyone else, and thus concluded that only he himself existed, being ignorant of the superior levels of reality that were his birth-place. Thus the demiurge is frequently identified as the Abrahamic God Yahweh.

The Gnostic myths describing these events are full of intricate nuances portraying the declination of aspects of the divine into human form: this process occurs through the agency of the Demiurge who, having stolen a portion of power from his mother, sets about a work of creation in unconscious imitation of the superior Pleromatic realm. Thus Sophia's power becomes enclosed within the material forms of humanity, themselves entrapped within the material universe: the goal of Gnostic movements was typically the awakening of this spark, which permitted a return by the subject to the superior, non-material realities which were its primal source (the Pleroma).

Sophia being painted by Lacan.

"People support each other to live... It's what brings us happiness... So share that happiness, and please... Lacan! Live!"

Sophia, as Elly, comforting the mutated Wels (Reapers) in a Soylent System facility.

Sophia, as Elly, comforting the mutated Wels (Reapers) in a Soylent System facility.

Portrait.
Add a photo to this gallery
Retrieved from "https://xenosaga.fandom.com/wiki/Sophia?oldid=51016"
Community content is available under CC-BY-SA unless otherwise noted.