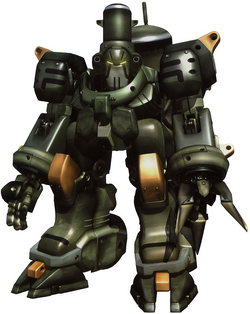 Stier (German word for "bull") is a gargantuan green monster of a Gear. It shares several characteristics with its pilot, Ricardo Banderas. It has wheels on its feet and a large rocket on its back.

Stier was custom built by the Nortune Battling Committee for Rico after he became champ for the first time. Rico never lost a match thereafter with it until Fei came along.

After Rico was dethroned by Fei in the tournament, the Battling Committee which was run by the Ethos Society arranged a special match for Rico and they rigged his Gear to malfunction and crash into the Kaiser's box seat. The incident lead to Rico being sentenced to execution after the Committee testified that Rico intentionally plowed Stier into grandstands in an attempt to kill the Kaiser. Rico was later rescued by Fei and along with Citan, Elly and Hammer they fled to freedom from Kislev.

In Disc 2, Stier is aligned with the Anima Relic Gad and transformed into the Omnigear El-Stier.

In battle Stier is powerful, but it is weaker to Ether-based attacks, slow, and inaccurate. It does, however, have quality framework.

Stier relies on punches and headbutts as well as firing bullets from its vulcan chamber to unleash its deathblows. Like its pilot Rico, it can utilizes his wrestling fighting style.

Retrieved from "https://xenosaga.fandom.com/wiki/Stier?oldid=50878"
Community content is available under CC-BY-SA unless otherwise noted.