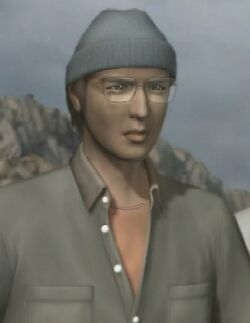 Dr. T. Masuda was the archeologist who supervised and led the excavation that unearthed the Zohar, as well as Lemegeton, in Lake Turkana in Kenya approximately 4,000 years prior to Xenosaga. His excavation was funded by Vector Industries and Wilhelm, who studied the artifact after its discovery. Vector's experiments eventually lead to the founding of the Galaxy Federation and, later, the disappearance of Earth, which was then renamed Lost Jerusalem.

T. Masuda lived on the planet Earth/Lost Jerusalem long before the Galaxy Federation was established in A.D. 2510. Beyond his name and the excavation results, essentially nothing is known about him. Based on his name, he is assumed to be of Japanese descent.

Working as an archaeologist, he discovered a small Zohar Replica sometime before or during the year A.D. 20xx. That year, he lead a research team, at Lake Turkana in the African nation of Kenya, funded by Vector Industries. The team uncovered an altar (the base of the Compass of Order and Chaos), where Masuda then placed the Replica, causing the Zohar to rise from the lake's depths.

The Zohar discovered by Masuda was transferred to Vector's labs in Toronto, Canada, where various examinations and experiments were performed upon it by Grimoire Verum. These experiments eventually lead to the human race abandoning Earth and the planet's disappearance sometime after the year T.C. 0016, when the Immigrant Fleet of Ormus is launched in a first, successful attempt of human settlement in the greater galaxy. The Zohar vanished with Earth and was not rediscovered for a long time.

Retrieved from "https://xenosaga.fandom.com/wiki/T._Masuda?oldid=45923"
Community content is available under CC-BY-SA unless otherwise noted.