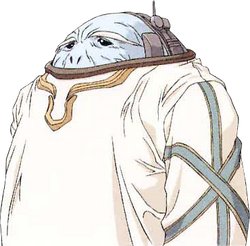 Taura Melchior is one of the three Sages of Shevat, the other two being Isaac Balthasar and Gaspar Uzuki. Melchior specializes in researching nanotechnology.

Melchior resurrected the nanotechnology worked on by Kim Kasim, and taught this to Karellen as his teacher. He was an advisor and sage to Shevat before Queen Zephyr's time, and he stood behind her in her bid for the throne five hundred years ago.

During the Shevat-Solaris War, he worked with Karellen to bring nanotechnology back into the world, but after Sophia's death and Karellen's desertion, he went into hiding and continued his research alone. Melchior is one of the 'lucky' few Karellen 'punished' with eternal life.

Melchior has no known family and only minimal contact with Shevat; he prefers to conduct his research in remote areas, and in the game he can be found deep in the forests of the Elru continent in a house.

At the start of Disc 2, Melchior heals a mortally-wounded Fei Fong Wong and Elehayym Van Houten. After a period of three weeks, Fei and Elly are healed by Melchior and his nanotechnology.

When humanity begins transforming into Wels, Melchior attempts to cure them using his nanotechnology.

His first name may be a phonetic reference to the Torah.

Like the other two sages, his name references one of the three biblical wisemen (also known as kings) that visited Jesus Christ shortly after his birth.

Retrieved from "https://xenosaga.fandom.com/wiki/Taura_Melchior?oldid=51489"
Community content is available under CC-BY-SA unless otherwise noted.