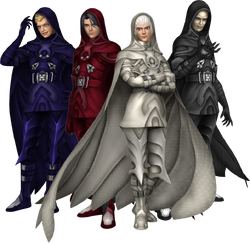 The Testaments are Wilhelm's closest assistants and servants. They are a group of four rather misanthropic men who are aiding Wilhelm in his Eternal Recurrence. It is also implied chaos has power over the Testaments, as one of them calls chaos "boss".[1]

Wilhelm selects Testaments based on Program Canaan. To become a Testament, one must require a trait known as a "Shining Will".

The Testaments are tied to the pasts of protagonists Shion Uzuki, Jr. and Ziggy.

They are deceased in the Real Number Domain of the Lower Domain, and instead, exist in the Lower Domain's Imaginary Number Domain. It is hinted that they possess the power to manipulate space, and they seem to be able to appear and disappear at will. The Testaments also possess superpowers.

Characterized by colored robes with matching masks, the true nature and power of the Testaments is unknown. Also, each Testament (as well as Wilhelm himself) appears to have their own E.S., a special kind of spacecraft that contains a Vessel of Anima. As of the end of Xenosaga Episode II, four Testaments have been revealed: red, blue, black, and white.

Wilhelm hints that the role of the Testaments involves "Influencing Space-Time Anomalies"; that much becomes clear when they resurrect Albedo Piazzolla and help to create a space-time anomaly which engulfs the Omega System. This may be part of a much larger plan that is generally believed to involve recovering or returning to Lost Jerusalem.

The Testaments are incredibly powerful and may easily rank as the most powerful entities in the series. None of them appear corporeal and are more spirit. They apparently can also transform into larger Gnosis monsters which may explain their ability to teleport (chaos states at the beginning of Episode II that no human can teleport or enter hyperspace safely without significant protection). They can also seemingly subvert the laws of physics to perform phenomenal feats as the Blue Testament states: "The laws which govern us are just too different" after he easily brushes aside the party. In order to become a Testament, the person the Testament was must die and cast aside their physical body.

Testament is not an existence that just anyone can become. Ones who are endowed with the factor that can actively access the power of Anima, like "those who responded purely to Anima" who, long ago, became the cause that predetermined the universe's collapse-- only those humans are made into Testament by means of Wilhelm's power. There are two reasons that Wilhelm made the humans who possessed that factor into Testament.

First, they are pawns in order to simply prepare the Eternal Recurrence. Though they may be called "pawns", they are not forced into service. The ones Wilhelm has made Testament are given the ability to create a world where they can live forever with a particular consciousness. In other words, Kevin and Virgil [etc] sought time eternal to spend with someone important to them, and in order to accomplish that, they followed Wilhelm.

The first and oldest of the four current Testaments. He appears for the first time in Xenosaga: Pied Piper as a U.M.N. cyberterrorist named Erich Weber who also went by the hacker alias Voyager. He was responsible for the death of Jan Sauer's (a.k.a. Ziggurat 8) wife and stepson. Of all four Testaments, we see him in action the most, though he doesn't appear much until the second game. He has very pale skin, no hair, and bright red eyes. He pilots a black humanoid E.S. with large, plate-like wings and fanned tail, accompanied by numerous cannon drones. When in transit to Old Miltia, Shion and Allen were attacked by him, whether this was to stop them or possibly gauge KOS-MOS's abilities when she promptly rescued them, is currently unknown.

In Xenosaga I&II his role is significantly expanded and he actually gets speaking lines. He speaks to Ziggy on the Omega System after unmasking for the first time. This leads to Ziggy opening up about his past to Shion and the others later in the game. Before that he confronts U-TIC / Ormus A.M.W.S. pilots Richard and Hermann and speaks with them. In Xenosaga III, Voyager confronts the party the most and actually speaks to Ziggy after the battle.

The next oldest Testament. His true identity is Kevin Winnicot, Shion Uzuki's lover who was supposedly killed by the Archetype KOS-MOS. The Red Testament appears to be Wilhelm's right hand man. The two of them have extended intimate conversations in several scenes throughout both games; in one scene they even play chess together. When the Testaments appear on the Omega System near the end of Episode II, Shion recognizes Kevin's voice when he addresses the Patriarch. He pilots an agile, red E.S. with blade-like horns, similar to the Xenogears antagonist Grahf.

This Testament was created during the course of the Xenosaga Episode I. He is Luis Virgil, a man who was killed by KOS-MOS during the Gnosis attack on the Woglinde. He appeared to have a violent hatred for Realians, and suffered from the potent DME Addiction. Even as a Testament his face still shows the cracking pattern characteristic of people with this addiction. In a mysterious comment in Xenosaga Episode I, he refers to chaos as boss.

He first appears as the Blue Testament on the Song of Nephilim where he bails out Albedo who was just defeated by Shion, Jr. and their companions. Albedo departs, telling the Blue Testament to give 'him' (most likely Wilhelm) a message: "'it' (most likely either Proto Merkabah, MOMO, or U-DO) belongs to me (Albedo himself). When Albedo departs Virgil attacks the group using his new found powers as a Testament, which include but are not limited to: subverting the laws of physics and transforming into a Gnosis. Moreover, the type of Gnosis that the blue testament transformed into (Ein Rugel) was also the same type of Gnosis that the Black Testament Voyager turned into when Ziggy, aka Jan Sauer, confronted him over 100 years ago.

The Blue Testament appears again after Albedo summons Proto Merkabah to Second Miltia and he is reprimanded by the Red Testament to just let Albedo be for the while. When the Red Testament shows him just what his and Wilhelm's plan is and how it relates to Albedo, he reluctantly backs off. He pilots E.S. Napthali, a blue, arachnid-limbed machine with a humanoid torso and a large accompanying rifle that can be teleported at will.

In Xenosaga I&II Virgil and E.S. Naphtali show up on Old Miltia in the Episode II portion of the game and he confronts Shion and her companions before they reach Labrynthos. He then attacks the group and they do battle. He later speaks with Shion before she faces Patriarch Sergius on the Omega System.

In Episode III, he appears frequently attacking and confusing the party. Once he attacks in his E.S. and again as himself with his Gnosis-like guardian assisting him in battle.

The newest Testament, who appears at the very end of Xenosaga Episode II. While his identity is a mystery at the end of Episode II, in Episode III it is revealed that the White Testament is U.R.T.V. Albedo Piazzolla, who had recently died in a confrontation with his brother Rubedo (a.k.a. Jr.). Wilhelm refers to him as the "weaver of the eternal circle of Zarathustra". He pilots a white E.S. with a rectangular body and suspended blades instead of limbs, with the "head" portion raised like a church steeple.

Retrieved from "https://xenosaga.fandom.com/wiki/Testaments?oldid=48736"
Community content is available under CC-BY-SA unless otherwise noted.