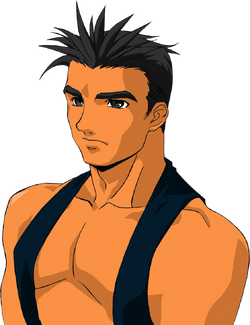 Timothy was Fei Fong Wong's closest friend in Lahan Village, the two having known each other for about three years. Timothy was also the fiancee of Alice, another childhood friend.

When Gebler and Kislev Gears appear and trade fire in Lahan, turning the town into a war zone, Fei and Citan run in to find Timothy and Alice looking for Dan. After Citan and Fei assure the couple that they will look for Dan and any other villagers who haven't evacuated, Timothy and Alice reluctantly leave.

After Fei discovers a strange Gear and uses it to try to defend the village, Timothy comes back into the village, and is brutally shot by one of the attacking Gears.

Seeing his best friend of three years murdered in front of his eyes, Fei mentally snaps and briefly morphs into Id. This causes Id to destroy the village, killing a nearby Alice.

Later, in Solaris, Fei accidentally mistakes a third class worker bee as Timothy, due to their resemblance. The man introduces himself as Samson, a surface dweller who was kidnapped after the Aveh tournament. Unlike the other worker bees, Samson remembers his life before being kidnapped. Samson attempts to help Fei escape, but is killed when attempting to pass an ID scan.
Retrieved from "https://xenosaga.fandom.com/wiki/Timothy?oldid=51793"
Community content is available under CC-BY-SA unless otherwise noted.