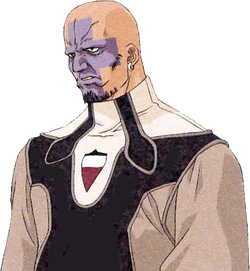 Vanderkam (mistakenly transliterated as "Vanderkaum" in the English localization) is a character from Xenogears. He has a distinctive tattoo of a blue plus sign on his face.

He was originally commander at the Aveh base. When he was demoted, he was sent to command at the border. He loses many lives due to his over-reliance on cannons.

Retrieved from "https://xenosaga.fandom.com/wiki/Vanderkam_(Xenogears)?oldid=51461"
Community content is available under CC-BY-SA unless otherwise noted.