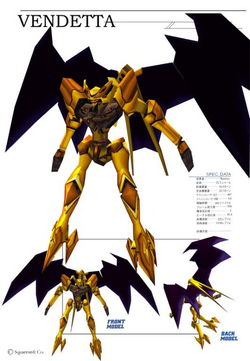 Vendetta is Ramsus' Omnigear. After his Gear Wyvern was aligned with the Anima Relic Zebulun, it was transformed into a monstrous Omnigear that became an embodiment of his hatred for his nemesis, Fei Fong Wong. Its wiry golden frame and massive black wings created an ominous air around the Gear.

It made an indelible mark when it rushed into frame chasing Weltall from behind then completely decimating it in the battle that followed. Vendetta's destruction of Weltall was the last event witnessed on Disc 1. However, impressive as it was as an Omnigear it was not indestructible.

When Fei came back in his newly rebuilt Weltall-2 and went one-on-one with Ramsus again, he proved to be the better of the two yet again and defeated Vendetta hand over fist forcing Ramsus to withdraw.

Vendetta appeared one last time in Nisan when Ramsus tried to do Karellen's dirty work and tried to kidnap Elly. However Elly, Marguerite "Margie" Fatima and Elly's squad of former Gebler soldiers were able to appeal to his humanity and convinced him to stop his attack. Ramsus retreated and Vendetta was never seen again in the game. It is assumable that it was disposed of and its Anima Relic consumed by Deus when Karellen gave Ramsus his Omnigear Amphysvena to use at Merkava.

Vendetta fighting abilities is similar to the pilot Ramsus' himself as the previous boss character where he can slash its opponent three times with its bare fist-like sword. It has a two abilities to its arsenal.

Blaze Pose- Vendetta amasses its power to an attack as its black wings are covering his gear during charge.

Gigaflare- Vendetta's powerful ether move where it charges a giant laser-like flames to damage its opponent for an extensive damage. This ability was demonstrated when he destroys Weltall and also severely injures both Fei and Elly while inside the Gear in the end of Disc 1. 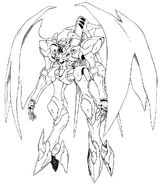 Add a photo to this gallery
Retrieved from "https://xenosaga.fandom.com/wiki/Vendetta?oldid=51173"
Community content is available under CC-BY-SA unless otherwise noted.