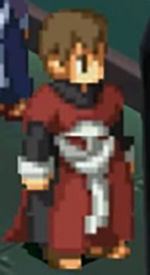 Verlaine is a friend of Billy Lee Black's in the Ethos church and a fellow Etone. Verlaine is actually a specially trained assassin working for Bishop Isaac Stone, responsible for observing and eliminating any Ethos members that deviate from its true purpose.

When the party first encounters Verlaine, Verlaine tells Billy about his father being "rather active again", and how much better of an Etone Billy is, compared to his father. Billy reacts negatively, stating he and his father are related "in blood only".

Later, when the Ethos headquarters is attacked, Fei and the party investigate deeper into the headquarters and find evidence of its ties to Solaris, and how Solaris uses the Ethos organization to gain supplies, slaves, and intel from the surface, as well as manipulate global affairs. The party also finds out the organization's plot to break away from Solaris, in order to pursue their own plans of world domination.

As Billy struggles with this, Verlaine reveals himself, stating that Billy has been 'defiled' in falling away from Ethos, and that Verlaine himself will cleanse him with death. Jessie enters and stops Verlaine with a stun bullet.

Jessie reveals that the attack is actually a 'purge', by order of Bishop Stone, in order to kill any Ethos members that are not affiliated with Solaris. Verlaine adds to this, revealing the extent of the crimes the members have done, as well as his duty to assassinate them. He also implies this were the sorts of duties Billy would have been tasked with in the future, had he stayed on his previous path.

Before Verlaine is able to explain further, he is killed by Stone and two assassins.

Retrieved from "https://xenosaga.fandom.com/wiki/Verlaine?oldid=51906"
Community content is available under CC-BY-SA unless otherwise noted.