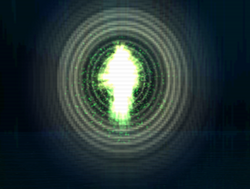 The Wave Existence is a divine being pulled from a higher dimension, and a force that became entwined in the creation of humanity on the planet Xenogears takes place on. It appears as a glowing radiant light or energy to Fei Fong Wong. When asked if it was "God" by Fei, it replied that from a certain point of view, it is right to view it as such, but at the same time, it is not.

The Wave Existence is a bodiless existence from a higher dimensional space. It exists in the form of "waves" and thus, cannot be perceived in its normal state by the human mind. The universe the world of Xenogears is set in originally existed in this higher dimension of waves, before becoming the universe it is now.

After the Zohar was used as the primary power source to create the planetary weapon known as Deus, it connected with a higher dimensional space, synchronizing with the Wave Existence.

Since then, it has tried to return to its original state and dimension, a process that it requires Fei, as the Contact, and Elly, as the Antitype, to complete. It is sympathetic to Fei's plight and the tragedy it indirectly caused, and went on to encourage Fei when he comes to terms with his past.

Because it is a wave energy connected to a higher dimension, the Wave Existence is not human, and neither male or female.

It is a being that is defined by those who observe it, such as when it appears in front of Fei outside the confines of the Zohar, It is also not human in nature, but has been given human attributes, such as Abel's need for a mother.

While people like Karellen looked to the Wave Existence as a power higher than Deus, it never wished for worship, obedience, loyalty or followers. Instead, the Wave Existence desired freedom and liberation, specifically from the Zohar. Unlike Deus, its plan did not actively involve the deaths of the very humans it had helped to create.

Trapped inside the Zohar Edit

Thousands of years prior to Xenogears, the Wave Existence became trapped inside the Zohar during the initial test of the Deus System, and became inseparable from Deus. However, the Wave Existence and Deus seek separate things. The Wave Existence wishes to return to its higher dimension, while Deus seeks to produce the human bodies it needs to complete its body at all costs.

The Wave Existence is responsible for the energy that powers the Gears and people's ether abilities, which is why the Zohar appeared to be the main source of power.

In 9501, Lacan, a previous incarnation of Fei, made contact with the Zohar. This awakened his powers as the Contact and transformed his Gear into a much more powerful one, Alpha Weltall, much like how Fei would later make contact with the Zohar and receive the Xenogears (Gear). When Lacan died and became Grahf, he lost many of his abilities as the Contact, but kept his Omnigear.

Karellen, after analyzing Razael's Tree in Razael, had discovered the dark truth of Deus, as well as the existence of the Wave Existence.

His original goal (Project Noah) was to "resurrect god", but it eventually shifted into "go to the place of god" (reunite with the Wave Existence, and not only himself, but also all of humanity and life on the planet by "returning to waves")

The Wave Existence begged the Contact Fei to destroy the Zohar so it could return to its own dimension.

The Wave Existence used the Contact to free itself from Deus and the Zohar and return to its dimension via the Path of Sephirot.

It is after merging within Deus that Karellen comes to understand Sophia's words about love, enabling him to pursue a different path: to walk with god.[1]

Retrieved from "https://xenosaga.fandom.com/wiki/Wave_Existence?oldid=50524"
Community content is available under CC-BY-SA unless otherwise noted.