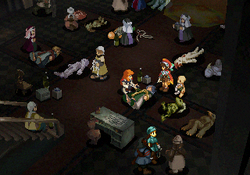 Wels (ウェルス, Uerusu), also known as Reapers, are mutated humans in Xenogears. They are intended by an ominous group (the Gazel Ministry) to be used as the fleshy material to revive Deus. Wels are often created in secret laboratories (such as Karellen's Lab) or in the many Soylent Systems.

In Disc 1, it is revealed that workers for Ethos church, known as Etones, kill Wels believing that in doing so, they are "saving" them. This includes Billy Lee Black. Later, Isaac Stone reveals this is merely a control system for Solaris, and that the Wels are chosen humans by the Ethos and converted into monsters by Solaris. The Wels are guinea pigs for Solaris' M Plan (Malahk Plan).

At the start of Disc 2, Elly Van Houten and Emeralda Kasim go to the Mass Driver Facility to release the Limiters of everyone on the planet. During this time Krelian activates a virus of some sort in tandem which changes some people into wels which makes the party think it was the release of the limiters that changed them.

Fei Fong Wong and his allies went from place to place, destroying all the Soylent System facilities located on the surface of the earth and freeing the people held at each location. The Wels divide themselves into the 'haves' and 'have nots', and some even resort to cannibalism due to their desire for flesh and meat. All the people that had been mutated were taken in by Nisan where they received treatment.

Later, the Gazel Ministry then uses the Gaetia Key, an artifact that manipulates the DNA of humans around the world, turning a majority into mutant Wels. This is done to collect flesh to reconstruct Deus, the very same entity that crash-landed on the planet ten thousand years ago.

The name "Wels" may be a reference to H. G. Wells, who created The War of the Worlds which features aliens. Wels can be seen as being alien-like. Shion Uzuki makes reference to this in Xenosaga Episode I.

The name "Wels" may also be a phonetic allusion to Weltall (pronounced "velt-all", German for "universe").

The Skell model Verus from Xenoblade Chronicles X is originally named "Wels" in the Japanese version.

Retrieved from "https://xenosaga.fandom.com/wiki/Wels?oldid=51315"
Community content is available under CC-BY-SA unless otherwise noted.