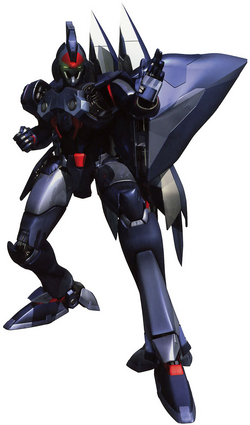 Weltall (pronounced "velt-all", German for "universe") is a svelte but powerful black-red humanoid Gear. It is called the host for the slayer of god.

Weltall was constructed in Kislev using parts supplied to them from Solaris by Grahf. It was specifically custom-made for Fei Fong Wong, or more importantly custom-made for Id. Many of the Gear's black box components were Ether amplifiers and components used to transform the Gear into Weltall-Id.

Grahf manipulated Gebler into raiding the factory where it was being stored and returning with it to Aveh, he also engineered that it would crash-land in Lahan Village with the intention that Fei would get inside it and Id would awaken within it. His plan worked perfectly. While Fei was reluctant to pilot it after the incident, fate seemed to draw him and Weltall closer and closer together until he just accepted being its pilot.

Its first appearance in the game sets the plot into motion and irrevocably changes the life of young protagonist Fei. Weltall is probably the most important and mysterious Gear in the entire world and pivotal to the game's storyline.

At the end of Disc 1, Weltall is tracked down and destroyed by Kahran Ramsus' Omnigear Vendetta. Weltall is rebuilt into the larger and more powerful Weltall-2 by Taura Melchior, of the three Sages of Shevat, at the start of Disc 2.

The standard Gear that serves as the foundation of the Omnigear Alpha Weltall, which was formed by the fusion of the Gear that Lacan piloted and the Anima Relic Naphtali. Weltall is used exclusively by Fei (Id), and serves as a key component in Grahf's plot. Due to this, the main body provides the base form for Alpha Weltall, and for this reason, parts of the exterior greatly resembles Alpha Weltall. Also, the main slave generator is a pure replica of the one loaded into Alpha Weltall, and even with the difference in the building materials themselves, output levels are almost equal to the original.

Altogether it is different from Alpha Weltall, and just about all parts making up Weltall are just like those used in other standard Gears, but when its output is at its highest it appears to have no material weakness. In truth, in very small portions only, when the output is at its highest, abrasive loss has some effect on active construction, not extending to the resillience of the mainframe, it estends to the exterior.

Because it is piloted by Fei (Id), Weltall's true power is quite dangerous. Suddenly transforming into a larger Gear, the exoskeleton is able to change, according to design, a Limiter is placed to equalize the output during peaceful times so as to lengthen the time it can function. Because of this, Weltall is guaranteed to always emerge from any crisis it faces.

Weltall fights in barefists and is able to utilise most of its fighting moves based on Fei's Deathblows. His Ether magic is identical to Fei's Chi as his Guided Shot has a drastic change.

Weltall utilizes both punches and kicks when utilising its moves and is based on Fei's Deathblows. It is also utilising drill kicks and somersaults when using its one of its moves.

Fei in Weltall during Lahan's burning.
Add a photo to this gallery

Xenogears - Weltall & Weltall 2 Deathblow Exhibition
Add a photo to this gallery
Retrieved from "https://xenosaga.fandom.com/wiki/Weltall?oldid=51699"
Community content is available under CC-BY-SA unless otherwise noted.