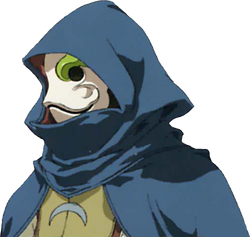 Wiseman first appears in a flashback when Chief Lee tells Fei Fong Wong that he had brought him to Lahan Village three years before the start of the game.

This masked, hooded, and caped figure appears several times throughout the game and gives Fei, Khan's son, advice. Sometimes he appears to fight or antagonize him and other times he appears to directly help Fei and the group, such as when he appeared in Zeboim in order to contain Id.

Wiseman appears in the flesh just before the battle tournament in Bledavik and it is clear from his introduction that he is not just a minor character.

While exploring the Zeboim Ruins, Wiseman appears in an attempt to stop Id. The scene ends on a cliffhanger.

The last time Wiseman appears is after Fei and Id have reconciled in Fei's mind and Xenogears is created. Wiseman disappears forever when he reveals his true identity as Khan Wong. It is also revealed that Wiseman, Khan, and Grahf are the same person, and Grahf has taken over Khan's body and is using him as a host. Khan's will allowed him to periodically break free of Grahf's control and act of his own accord. It is during these times that he appeared as Wiseman.

Wiseman in the Bledavik Tournament.
Add a photo to this gallery
Retrieved from "https://xenosaga.fandom.com/wiki/Wiseman?oldid=51870"
Community content is available under CC-BY-SA unless otherwise noted.