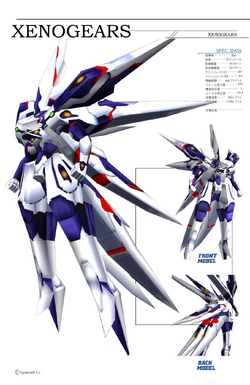 Xenogears is the most powerful Gear in Xenogears.

It is not an Omnigear, rather it is Fei Fong Wong's Weltall Gear that made contact with the Wave Existence.

It is a large white Gear with 8 spikes coming out of its back and angelic wings which appear when the Xenogears reaches its maximum power limit in battle (with a 99% chance of happening after the first round of battle). The Gear also floats all the time, and its feet appear to be inside giant modules which allow this.

Fei receives this after meeting the Wave Existence inside the Zohar. He easily beats Alpha Weltall afterwards, then heads on with the others to destroy Deus.

After the Zohar Modifier is destroyed, Xenogears is the only Gear that is left working (as it is the only Gear on the planet not irretrievably reliant on a Zohar slave generator). Fei chases after the Malakh Angel into Deus and then totally annihilates Urobolus inside. He then returns to earth in it with Elehayym Van Houten. The Xenogears is truly a one of a kind machine, as evidenced at the end when the Anima Relics of all the party member's Omnigears were stripped from them and stolen by Karellen in order to revive Deus.

This reverts all the Gears to their original, weaker forms until Fei comes on scene with the Xenogears. The Xenogears is so powerful, that its energy could actually be used on the other Gears to elevate them to Omnigear status again, making the Xenogears quite godlike and possibly on par with the Deus and the Zohar generator themselves. This could possibly be evidenced by the fact the giant Gear-like machine that Deus embodies in the end which the player fights has many design similarities to the Xenogears. Having both be of the same advanced technology could also support the Wave Existence's claim for Fei to use it to destroy Deus, giving the impression that it's a Gear made especially to destroy the godlike being.

Despite being the titular mecha of the game, Fei only receives this Gear near the very end of the game.

The word Xeno comes from the Greek word, "foreign", as this would apply to Xenogears. This means that Fei's Gear is foreign, or not of the regular kind.

Unlike the previous Gears that Fei pilots, Xenogears can do single punches as part of its deathblow that cause extensive damage to its opponent and powerful blows that inflict heavy damage. It is focused more on the punches rather both punches and kicks coming from the previous Gears, but retains the ability to do drill kick on its opponent. It also gains more special attacks where it makes a massive aura blast on its opponent and throwing its opponent to the ground to make a front drill kick. When executing his infinite deathblows, it can do 2 to 3 powerful blows or multiple punches towards its opponent. Some of its deathblows are also renamed.

Xenogears-Id
Add a photo to this gallery

Xenogears hyper mode deathblows.avi
Add a photo to this gallery
Retrieved from "https://xenosaga.fandom.com/wiki/Xenogears_(Gear)?oldid=51792"
Community content is available under CC-BY-SA unless otherwise noted.