The unnamed planet is the planet in which Xenogears occurs. It is sometimes called "Earth" or "the earth" in-game, but it is unknown if this is the actual name for it. Regardless, it is not the same as Lost Jerusalem.

The planet is orbited by an orange-red moon, which is shown to have rings during the introduction cutscene.

It can be divided into four "areas" or "regions":

In the center, Solaris can be found, located high in the sky.

The world of Xenogears can be considered a dystopia. Scientific advance is largely halted, with many economies depending on the excavation of advanced technologies from past civilizations dug out of the ground.

Many major countries of the planet are at war with each other. Though when the game begins this war is in a cold state, it escalates through the story. The most wide-spread religion, the Ethos, acts in part to safeguard humanity and help collect artifacts from excavations, while a secret branch helps control the population and keep them from attaining the truth of the world.

At the end of Xenogears, Fei Fong Wong and his allies are able to expose Solaris and free humanity from its grisly fate, but the cost is high, as the defeat of Deus and the departure of the Wave Existence permanently disables the power source of all Gears, save the Xenogears itself. 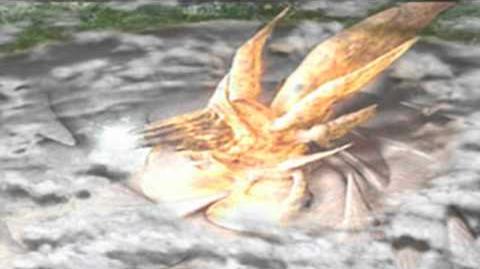 Xenogears FMV - Merkava Transforms - 21 25
Deus terraforms with the planet's surface.
Add a photo to this gallery
Retrieved from "https://xenosaga.fandom.com/wiki/Xenogears_planet?oldid=51443"
Community content is available under CC-BY-SA unless otherwise noted.