Xenosaga: Pied Piper is a game released exclusively for the now defunct Vodafone phones in Japan. Its script has been fan-translated into English and can take 2 or 3 hours to read. The game itself, however, seems no longer accessible.

Despite that it may seem like a simple phone game, Pied Piper is a rather essential and important part of the Xenosaga storyline. Like a typical Xenosaga game, it is full of religious allusions; Pied Piper contains many quotes to the Book of Revelation in the Bible.

Its story is set 100 years prior to the start of Episode I, in T.C. 4667. The events take place on planet Abraxas (later known as Michtam). It explores the past of the cyborg Ziggy when he was a human named Jan Sauer and working for the Galaxy Federation's counter-terrorism task force. It centers on Sauer and his team as they track a serial killer known only by the hacker alias "Voyager", who kills his victims using the U.M.N. network.

The purpose of Xenosaga: Pied Piper is to develop the back stories of some of the most important yet rarely felt presences in the Xenosaga universe, including Ziggy, chaos, Wilhelm, Voyager and Dr. Dmitri Yuriev. The plot itself spans three chapters.

The game was also Soraya Saga's final contribution to the Xenosaga project.

In T.C. 4667, on the planet Abraxas in the demilitarized zone, a meeting was held in order to improve relations between the Galaxy Federation and the Immigrant Fleet. And there, in that place of discussion inside virtual space, an incident occurred in which the goodwill ambassador and diplomats were imprisoned.

The Galaxy Federation Police 875th Special Ops Command dispatched a special investigation unit to the planet Abraxas with Jan Sauer as its captain. The name that came up as a suspect was Voyager. Besides that codename, nothing about him was known at all. He was a mass-murderer who had committed one heinous crime after another, targeting women and children.

When Jan arrived at the scene of the crime, he initiated a dive into the virtual space and hurried to the location where the ambassador was being held. Near where the diplomats were being held, they came under attack by macrophages. That attack resulted in the deletion of one of Jan's comrades, Erich Weber. Being deleted in virtual space means death in the real world as well. At great cost, Jan's group arrived at the diplomats' location. But what they saw there was a group of young children performing self-deletion and ending their own lives.

After the incident, the special investigation unit rejoiced when Erich miraculously came back to life. But the doctor who visited them--Sharon Rozas--declared that Erich's recovery was unthinkable under normal circumstances.

Without finding even a single clue toward solving the ambassador kidnapping incident, a new mass-murder incident occurred. The target this time was the Designer Children known as Salvator's Children. The children had been embryos in a nursing plant, genetically modified and intended to be raised for important positions in government. Voyager was once again suspected, but the special investigation unit was unable to confirm it.

Not long after the incident at the nursing plant, a party sponsored by the Torres Foundation was planned to be held inside the U.M.N. Even the head of the Immigrant Fleet, Patriarch Julius himself, was to be invited to this large-scale party.

Wary of terrorism by Voyager, the members of the special investigation unit stood guard. Suddenly, Irene Torres, the president of the Torres Foundation, suffered a seizure. She spoke a series of mysterious words and then collapsed. Certain that this incident was Voyager's work, the special investigation unit moved to catch the perpetrator in a trap.

Jan's team caught up to the suspect, Klaus, but he killed himself before their very eyes. To obtain information about the incident, Jan pushed aside Sharon's objections and performed a dive into Klaus' brain. Gazing into Klaus' memory, Jan's group learned that Klaus had been collecting something called endorphin programs and had been doing so in preparation for meeting someone.

Jan once again visited Sharon's residence to hear the results of her investigation. Sharon told him that the endorphins he had obtained had the effect of stimulating activity in a certain part of the brain.

Sharon also told him that both the diplomats and those who had provided DNA to the nursing plant had been pure-blooded Abraxas natives. The people of Abraxas, and all descendants of the Immigrant Fleet, are born with that part of their brain developed. Sharon, too, had the blood of the Immigrant Fleet in her veins. She told Jan that the citizens of Abraxas had once been called the People of Zohar.

At the end of numerous difficult battles, the special investigation unit finally discovered Voyager's identity. However, the person they found was not the hideous monster they had expected, but someone they had never even imagined.

Voyager said that he had the power of the Zohar, and that to fulfill his contract with U-DO he must gather large amounts of endorphins. Jan was certain from Voyager's words that his next target was the Pilgrimage Meeting, where large numbers of Abraxas citizens would gather. Sharon and Joaquin, too, were participating at the cathedral where the Pilgrimage Meeting was taking place.

The Zohar began to glow, as if responding to the prayers of the participants. The space around it turned to crystal, and the participants disappeared, one after another. Voyager and Jan faced off before the awakening Zohar. To fulfill his contract with U-DO, Voyager ended the lives of his final targets--Sharon and Joaquin.

For the first time, Jan saw Voyager's crime with his own eyes. The bodies of Sharon and Joaquin lay before him. His world overcome with despair, his fight with Voyager entered its final stage. But Jan stood no chance against Voyager the Testament. As his only method of resisting Voyager's will, Jan ended his own life. 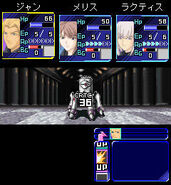 Jan, Melisse and Lactis fighting a boss called Sleipnir.
Add a photo to this gallery
Retrieved from "https://xenosaga.fandom.com/wiki/Xenosaga:_Pied_Piper?oldid=49235"
Community content is available under CC-BY-SA unless otherwise noted.