Start a Wiki
Xenosaga I & II 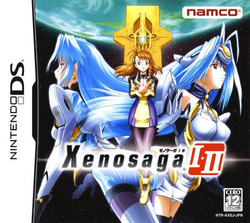 Xenosaga I & II is a retelling of Episode I and Episode II for the Nintendo DS. It was exclusively released in Japan on March 30, 2006 and has never received an English translation or even a fan translation, much to fan chagrin.

The game's script (with ideas from Tetsuya Takahashi) is by Yuichiro Takeda, who worked on Xenosaga: The Animation. Hiroshi Takeuchi, of Cowboy Bebop fame, is responsible for the character art. Music for the game was composed by Kousuke Yamashita, who scored the soundtrack for Xenosaga: The Animation. Other previous work includes the Hana Yori Dango and Mahou Sentai Majirenjaa Tabidate live-action television series and Nobunaga's Ambition video game series. Yamashita is the fourth composer to score a Xenosaga video game, following Yasunori Mitsuda, Yuki Kajiura and Shinji Hosoe.

Xenosaga I & II is not an exact retelling of the previous two games. Some major changes have been made to the storyline of the game without changing the pre-existing elements the first games have already laid out. Some scenarios have been edited and some new but minor characters have been included in these new parts. The Episode II portion of the game, originally told through Jr.'s perspective, focuses on Shion, much like Episode I and Episode III. The Episode II portion of the game has been completely rewritten by Xenosaga creator Tetsuya Takahashi, which expands and enhances the storyline. This fills in some of the holes caused by Episode II, allowing for a better understanding of the plot and reducing the amount of questions that will be unanswered in Episode III.

The game plays out on the DS' top screen from an isometric perspective while the bottom touch screen is used to issue commands and navigate menus. The game's battle mechanics follow the style of Episode I as opposed to Episode II.

Shion and KOS-MOS inside the training simulator.

Kevin, Shion and Allen look at the KOS-MOS Archetype.

Shion and KOS-MOS.
Add a photo to this gallery
Retrieved from "https://xenosaga.fandom.com/wiki/Xenosaga_I_%26_II?oldid=51050"
Community content is available under CC-BY-SA unless otherwise noted.