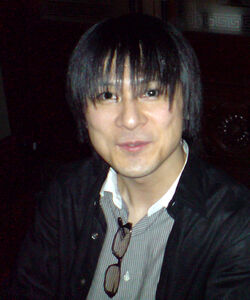 Yasunori Mitsuda (光田 康典, Mitsuda Yasunori, born January 21, 1972) is a Japanese video game composer, sound programmer, and musician. He has composed music for or worked on over 35 games, and has contributed to over 15 other albums. He is best known for his compositions for the video games:

He began composing video game music for his own games in high school, and after graduation attended Junior College of Music in Tokyo. In 1992 upon graduation he joined Square (now Square Enix) as a composer after seeing a magazine advertisement in an office he was visiting with his professor.

Retrieved from "https://xenosaga.fandom.com/wiki/Yasunori_Mitsuda?oldid=23065"
Community content is available under CC-BY-SA unless otherwise noted.