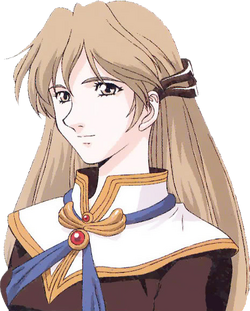 She is a very kind, generous person and a terrific cook to boot. Having been taught martial arts by her grandfather, she is also an expert swordswoman and was the best warrior in her native Shevat at one time.

During an attack by Solaris on Shevat, Yui fought and defeated a young Solarian soldier named Hyuga Ricdeau and took him prisoner. Instead of killing him, Yui showed him mercy and tended to him while he was in custody. From this, a bond of love was formed between them and eventually, Yui married him and he took her name when he constructed a new identity for himself for his upcoming mission on the surface world.

With her new husband Citan Uzuki, Yui moved down to the surface to a quaint house near Lahan Village and lived there for quite some time as her husband kept watch on Fei Fong Wong, the newly discovered Contact for Emperor Cain. Yui and Citan shared a tremendous level of understanding that could have only come about unconditional love as she still loved and stood by him, even when he was still working for Solaris.

After Lahan is destroyed by Id, Yui brought the survivors with her when she moved back to Shevat. Fei is surprised to find Yui in Shevat, and she told him that the destruction of Lahan wasn't his fault, it was Solaris'.

While Midori is seen again in Disc 2, Yui, like many important minor characters, is conspicuously absent. Not even the Xenogears Perfect Works gives any clues to her mysterious fate. However if the player receives Midori's ring at Citan's house and gives it back to her in Disc 2, Fei tells her to "Be a good girl to Yui," suggesting that she does indeed survive the cataclysm.

Retrieved from "https://xenosaga.fandom.com/wiki/Yui_Uzuki?oldid=47741"
Community content is available under CC-BY-SA unless otherwise noted.