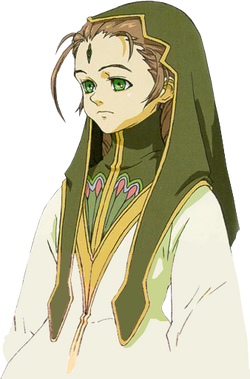 Queen Zephyr is the humble-yet-strong leader of the nation of Shevat. She is one of the few on the planet who knows some truth about the world. She has reigned at least since the time of the Shevat-Solaris War, making her 522 years old at the beginning of Xenogears.

Zephyr fought against Solaris during the Shevat-Solaris War as part of the Anti-Solaris Alliance. She also knew Sophia. She survived the Diabolos Collapse.

In 9505, Zephyr, along with the Three Sages (Isaac Balthasar, Gaspar Uzuki and Taura Melchior), restored Shevat after its assault by Solaris.

In 9511, along with the Sages of Shevat and several other individuals, she was "punished" with the gift of eternal life through nanomachines for, in Karellen's mind at least, sacrificing Sophia to end the war.

Zephyr currently has has no spouse, family, children or relatives. She is a benevolent and gentle woman, yet harbors much sadness and has witnessed some truly unbearable things in her lifetime.

In the second disc of the game Shevat is destroyed during the resurrection of Deus and crash lands on one of the northern snow-covered islands of the world. She remained queen of the surviving population of Shevat and the rest of the world in the Snowfield Hideout.

Later, Zephyr tells Fei Fong Wong and his allies about the existence of Anima Relics, and advice on where they may find them.

Retrieved from "https://xenosaga.fandom.com/wiki/Zephyr?oldid=49680"
Community content is available under CC-BY-SA unless otherwise noted.